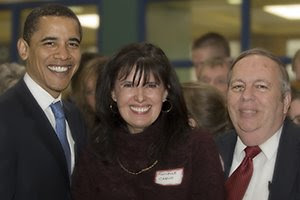 On February 10, 2007, Barack Obama announced his candidacy for President of the United States in front of the Old State Capitol in Springfield Illinois. Later that same evening my husband Jon, who is a mayor here in the United States, and I had the opportunity to meet him for the first time. We met with him several times during his campaign and I was impressed with his authentic leadership style and his ability to be present in the moment. On one occasion I introduced a little boy to him who went through a difficult time without explaining anything. Barack showed very sincere kindness that meant a lot to this boy and the boy expressed a greater sense of hope for the future.
Professor Jonathan Haidt, an expert in Positive Psychology from the University of Virginia in the United States, researched the effectiveness of Obama's public speaking and concluded that part of his excellence is because he is good at inspiring the emotion of elevation, the desire to act morally and do good for others. Many people view him as a natural orator and believe that speaking is happening very naturally for him, but I saw on several occasions that it is still taking a lot of energy from him to do so!
We followed Obama's campaign with interest and celebrated with millions of Americans and people from all over the world on November 4 when Barack Obama was elected as the 44th President of the United States of America.
Above is a picture that was taken on the evening of Barack's announcement of his candidacy to run for President. He asked a photographer to take this picture and I will always be glad that he took the initiative to capture this moment!
Posted by Dr. Langley at 8:04 AM

Dr. Langley
enjoys meeting people and traveling to different countries. A wide variety of topics and experiences makes life interesting for her – from watching the sun set behind the mountains with all shades of pastels to trying to keep up with what is happening in the global economy (although the latter is perhaps more of a challenge than an interest at the moment!) She loves having fun and her highlight is spending time with her husband and kids.